The Real Way to Build a Social Network 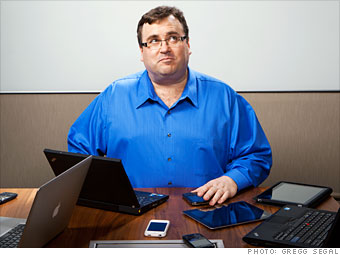 If there is a guru of networking, it is Reid Hoffman, founder and executive chairman of LinkedIn. Here he explains how to do it right — and wrong — in an excerpt from his new book with Ben Casnocha, The Start-Up of You | These excerpts are from the February 6, 2012 issue of Fortune.

Many people are turned off by the topic of networking. They think it’s slimy, inauthentic. Picture the consummate networker: a high-energy fast talker who collects as many business cards as he can and attends mixers sporting slicked-back hair. Or the overambitious college kid who frantically e-mails alumni, schmoozes with the board of trustees, and adds anyone he’s ever met as an online friend. Such people are drunk on networking Kool-Aid — and are looking at a potentially nasty hangover.

Luckily, building your network doesn’t have to be like that. Old-school networkers are transactional. They pursue relationships thinking solely about what other people can do for them. Relationship builders, on the other hand, try to help others first. They don’t keep score. And they prioritize high-quality relationships over a large number of connections.

Building a genuine relationship with another person depends on at least two abilities. The first is seeing the world from another person’s perspective. No one knows that better than the skilled entrepreneur. Entrepreneurs succeed when they make stuff people will pay money for — and that means understanding what’s going on in the heads of customers. Likewise, in relationships it’s only when you put yourself in the other person’s shoes that you begin to develop an honest connection.

The second ability is being able to think about how you can collaborate with and help the other person rather than thinking about what you can get. We’re not suggesting that you be so saintly that a self-interested thought never crosses your mind. What we’re saying is that your first move should always be to help. A study on negotiation found that a key difference between skilled and average negotiators was the time spent searching for shared interests and asking questions of the other person.

The best way to engage with new people is not by cold calling or by “networking” with strangers at cocktail parties, but by working with the people you already know. Of the many types of professional relationships, among the most important are your close allies. Most professionals maintain five to 10 active alliances. What makes a relationship an alliance? First, an ally is someone you consult regularly for advice. Second, you proactively share and collaborate on opportunities together. You keep your antennae attuned to an ally’s interests, and when it makes sense to pursue something jointly, you do. Third, you talk up an ally. You promote his or her brand. Finally, when an ally runs into conflict, you defend him and stand up for his reputation, and he does the same for you.

I [Reid] first met Mark Pincus while at PayPal in 2002. I was giving him advice on a startup he was working on. From our first conversation, I felt inspired by Mark’s wild creativity and how he seems to bounce off the walls with energy. I’m more restrained, preferring to fit ideas into strategic frameworks instead of unleashing them fire-hose-style. But it’s our similar interests and vision that have made our collaborations so successful.

We invested in Friendster together in 2002. In 2003 the two of us bought the Six Degrees patent, which covers some of the foundational technology of social networking. Mark then started his own social network, Tribe; I started LinkedIn (LNKD). When Peter Thiel and I were set to put the first money into Facebook in 2004, I suggested that Mark take half of my investment allocation. I wanted to involve Mark in any opportunity that seemed intriguing, especially one that played to his social networking background. In 2007, Mark called me to talk about his idea for Zynga (ZNGA), the social gaming company he co-founded and now leads. I knew almost immediately that I wanted to invest and join the board, which I did. An alliance is always an exchange, but not a transactional one. A transactional relationship is when your accountant files your tax returns and you pay him for his time.

An alliance is when a co-worker needs last-minute help on Sunday night preparing for a Monday morning presentation, and even though you’re busy, you agree to go over to his house and help. You cooperate and sacrifice because you want to help a friend in need but also because you figure you’ll be able to call on him in the future when you are the one in a bind. That isn’t being selfish; it’s being human.

The diversity of weak ties

Allies, by the nature of the bond, are few in number. By contrast, there are potentially hundreds or thousands of looser connections that also play a role in your professional life. These are the folks you meet at conferences, old classmates, co-workers, or just interesting people. Sociologists refer to these contacts as “weak ties”: people with whom you have spent low amounts of low-intensity time but with whom you’re still friendly.

Weak ties usually sit outside the inner circle. Thus, there’s a greater likelihood that a weak tie will be exposed to new information or a new job opportunity you’d otherwise miss. To be sure, weak ties are uniquely helpful so long as they hail from a different social circle or industry niche and therefore bring new information and opportunities. A weak-tie acquaintance whose job and background is identical to yours is unlikely to offer unique network intelligence. So when connecting with acquaintances, prioritize diversity in order to broaden the overall reach of your network.

There is indeed a limit to the number of relationships you can maintain, but a crucial qualifier is that there is not one blunt limit of 150; in fact, there are different limits for different types of relationships. In relationships, you may have only a few close buddies you see every day, yet you can stay in touch with many distant friends if you e-mail them only once or twice a year. But there’s a twist: You can actually maintain a much broader social network than the people you currently “know.”

Suppose you have 40 connections, and assume that each friend has 35 other friends in turn, and each of those friends of friends has 45 unique friends of his own. If you do the math (40 × 35 × 45), that’s 63,000 people you can reach via an introduction. People’s extended networks are frequently larger than they realize, which is why an early tagline at LinkedIn was “Your network is bigger than you think.” So how do you actually reach those connections? Via an introduction from someone you know, who knows the person you want to reach.Anytime you want to meet a new person in your extended network, you should ask for an introduction. You need to ask, directly and specifically, and you do need to present a compelling reason for why your connection should do it: “I’d love to meet Rebecca because she works in the technology industry.” Not good enough. “I’m interested in talking to Rebecca because my company is looking to partner with companies just like hers.” Better, as it appears to benefit both parties.

Several years ago sociologist Brian Uzzi did a study of why certain Broadway musicals made between 1945 and 1989 were successful and others flopped. The explanation he arrived at had to do with the people behind the productions. For failed productions, one of two extremes was common. The first was a collaboration between creative artists and producers who tended to all know one another. When there were mostly strong ties, the production lacked the fresh, creative insights that come from diverse experience. The other type of failed production was one in which none of the artists had experience working together. When the group was made up of mostly weak ties, teamwork and group cohesion suffered.

In contrast, the social networks of the people behind successful productions had a healthy balance: There were some strong ties, some weak ties. There was some established trust, but also enough new blood in the system to generate new ideas. Think of your network of relationships in the same way: The best professional network is both narrow/deep (allies with whom you collaborate regularly) and wide/ shallow (weak-tie acquaintances who offer fresh information and ideas).

The best way to strengthen a relationship is to do something for another person. But how? Here’s a good example. When Jack Dorsey was co-founding Square — the mobile-payments company — he had loads of investor interest. Digg and Milk founder Kevin Rose had seen a prototype of the Square device and immediately realized the potential. When he asked Jack whether there was room for another person to join the initial funding round, Jack told him it was full. But Kevin still wanted to be helpful. He noticed that Square didn’t have a demo on its website showing how the device worked. So he put together a high-definition video and then showed it to Jack. Impressed, Jack turned around and invited Kevin to invest in the Series A round of financing.

To be truly helpful, as Kevin was, you need to have a sense of your friend’s values and priorities. What keeps him up at 2 a.m.? What are his talents? His challenges? Once you understand his needs, think about offering him a small gift. A small gift is something that’s easy for you to give, unique to the relationship, and unusually helpful for the other person. Classic small gifts include relevant information, introductions, and advice. A really expensive big gift is actually counterproductive — it can feel like a bribe. When deciding what to give, reflect on your unique experiences and capabilities. What might you have that the other person does not?

Set up an “interesting people” fund

Relationships are living, breathing things. Feed, nurture, and care about them; they grow. Neglect them; they die. You might be nodding your head at the importance of staying in touch. But behavioral change isn’t easy.

Your capabilities and potential get magnified exponentially by an active, up-to-date network.  Create an “interesting people fund” to which you automatically funnel a certain percentage of your paycheck. Use it to pay for coffees and the occasional plane ticket to meet new people and shore up existing relationships.